We have been pleased to assist the UK Commission for Employment and Skills in promoting their UK Futures innovation programme, a series of competitions targeting workforce development challenges. 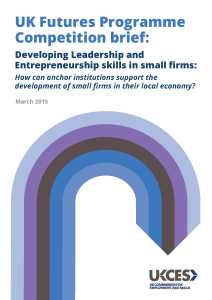 Derrick Johnstone’s role as an UKCES Associate was to identify organisations likely to be interested in these competitions (for themselves or their networks) and generate interest amongst them, and then provide independent advice to prospective bidders on behalf of UKCES. The aim was to stimulate high quality bids which have real potential to influence future practice and policy.

The Joseph Rowntree Foundation ran a joint event, Better Jobs, Better Business with UKCES in March 2016. It sought to explore the support needed to create a virtuous circle of higher skills, job progression and improved business performance, and featured case studies from the UK Futures competition on pay and progression in retail and hospitality, including the Living Wage Foundation, Jamie Oliver’s Fifteen Cornwall, and the National Coastal Training Academy. One output is the Hospitality Skills Toolkit which seeks to help employers grow their businesses with gains flowing to their staff as well as their bottom lines.

The overall evaluation of the UK Futures programme highlights benefits to business through partnership not least in sharing information, learning and resources.

The ‘critical friend’ role was particularly appreciated, highlighting how, in low cost ways, the Council can add more value in pursuit of economic growth.

Use of evidence in Parliamentary business

Improving future use of research and evidence featured in the conclusions of the Communities and Local Government Select Committee inquiry into its work since 2010.

Looking to the 2015 Parliament, the Committee recommended exploring how organisations such as the Alliance for Useful Evidence and the What Works Centres might usefully feed into the Committee’s future work, eg, in undertaking rapid reviews of available evidence on inquiry topics.

The Alliance for Useful Evidence submitted evidence jointly with Derrick Johnstone of Educe, author of our report, Squaring the Circle: evidence at the local level. Our submission updated some developments since its publication in 2013, and set out recommendations relating to the future work of the Committee.

The Committee acknowledged several of our suggestions, not least on the need to draw on wider sources of evidence and apply standards of evidence such as those adopted by Bond, the UK membership body for international development.

The Committee expressed concern about the DCLG response to its calls to explain the evidence base lying behind some areas of policy decision-making. It is attracted by the example of the Education Committee’s ‘evidence check’ where views are invited on the strength of evidence from the Department of Education on selected Committee themes. This web forum is intended to help with identifying where contrasting evidence exists and shape future Committee work.

Among proposals for future Committee inquiries were Devolution and City Deals. We, like the RSA City Growth Commission, highlight underlying issues around analytical capacity, skills and data as a significant area of risk to successful implementation. These are worthy of the Committee’s attention, looking at, eg: 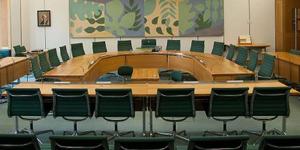 The UK Commission for Employment and Skills has a priority to give employers greater responsibility and ownership in developing the skills needed for growth, not least through the BIS-funded Employer Ownership of Skills (EOS) pilot programme. This is funding innovative, collaborative, employer-led projects capable of transforming the delivery of training and making a significant economic impact.

Derrick Johnstone was recruited to the UK Commission’s network of well-connected Associates who bring  specialist expertise, knowledge and skills into the organisation, to supplement and develop internal capability around the implementation of these funds. He was recognised for his specialism in ‘local and regional skills and employment interventions and economic development’.

Tasks have involved reviewing how Local Enterprise Partnerships are developing their role around skills, serving as an assessor in appraising bids under the second round of the Employer Ownership of Skills programme, and seeking early feedback on progress and learning from successful projects.

Derrick’s latest role is in support of the UKCES Futures programme. This promotes innovation in addressing current or anticipated workforce development problems that get in the way of improved business performance.

How are local authorities and their partners using data and evidence to square the circle of dramatic reductions in resources set against rising needs and expectations?

The Alliance for Useful Evidence (A4UE) commissioned Educe to report on how local authorities and their partners are seeking to make more of a difference through better use of ‘real world’ data and evidence. (Download available here and blog here.)

This scene-setting report considers, amongst other things:

It highlights practical steps and the scope for further action, for the Alliance, partners and supporters.

It was one of a series of Alliance outputs in 2013 which sought to stimulate the demand for and use of evidence through promotion of best practice and learning. We have since updated some of the content of ‘Squaring the Circle’ in preparing our joint submission with the Alliance for Useful Evidence to the House of Commons Select Committee for Communities and Local Government (January 2015).

The Alliance for Useful Evidence has now over 2,000 members. It was set up by Nesta, the Economic and Social Research Council and the Big Lottery Fund to “champion the use of and demand for evidence that is rigorous, accessible and appropriate”. The Alliance is working with SOLACE (the Society of Local Authority Chief Executives), and our paper was informed by participation in the 2012 SOLACE Summit.

Nesta are partners with the Cabinet Office and ESRC in setting up a network of What Works Centres, including one for Local Economic Growth, in an initiative launched in March 2013.